Every writer comes up with their ideas in different ways and takes a different approach to planning their next book, script, poem or article. But what are those ways? How can you ensure that the spark of the idea you’ve had can be transformed into a fully-fledged piece of writerly work?

Well, you may be pleased to know (or disappointed, depending on your mindset)  that planning a new creative writing project and making it stick doesn’t necessarily have to involve a secret voodoo magic ceremony where you sit in a dark cave, smear custard on your chest, chant “I sacrifice my heart to The Words” before eating a wadge of blank A4 printer paper.

Yes, there is a little magic involved in gathering ideas together to create a story. It does help if you do have the kind of mind that observes people and places, picks up the nuances of a situation (such as emotions, smells, colour, temperature, dialogue spoken etc) and logs them, attaches other memories/emotions and flashbacks to these stimuli and mixes them up in a kind of pea-soupy fashion to ensure they pop out later into the seed of a good idea.

But, there’s always practice too. And if you’re reading this and you’re starting your first writing project – or are finding that every idea you begin lately loses momentum or just isn’t quite right – then there are some useful things you can do to maximise the likelihood everything will flow well and turn out beautifully in the end.

For starters, don’t rush. Yes, I understand that you only have one life and you have so many ideas you want to write and share with the world. But. But. But. No writer who achieved success ever rushed their projects. Besides, it is very important to let all your ideas percolate inside your head for several weeks (if not, months or years) before committing anything to paper/laptop/ipad.

War Horse children’s writer and former UK Children’s Laureate, Michael Morpurgo, says he sometimes spends up to six months having his “dream time” before actually writing a book. This is because the book is then fully formed inside his mind and writing it down is almost a formality. Albeit a fun, necessary one.

So, don’t be too quick to get typing. Your mind should be given permission to relax, to keep picking up those nuanced ideas and be allowed to mould these into a much firmer, all-rounded creative concept that’s got impetus, passion and a need to be turned into a story with a voice.

You could also try visiting some of the places you want to use in your book. They could be seaside towns, derelict warehouses, shopping malls, museums, your grandfather’s house or a beautiful stretch of breathtaking countryside. And these places don’t have to actually feature in the book, poem or play – they could simply be illustrative examples that will allow your mind to build another layer of the fictional jigsaw it’s busily creating in your subconscious.

Following this research tourism, you might want to try what the brilliant children’s author Liz Kessler does: she types out every single individual idea she’s had about one book over several months, cuts them out with scissors and lays them out on the floor (which takes up a lot of space with hundreds of ideas!), ready to be “joined together” to make characters, plot, scenery and the beginning, middle and end of a story. 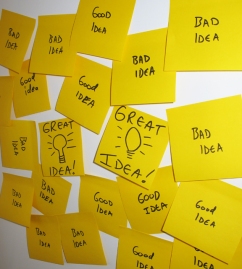 In the golden age of Hollywood, scriptwriters used to call part of their storytelling planning – how they fitted the plot points together – “piping”. This was because, with so many plots and sub-plots layered together to create a full film, there was always a need to plan how they all somehow linked up. So “piping” is about thinking ahead; about ensuring that one crucial scene in your film can be joined – by magical, invisible plumbing and pipework below the visual surface – to another scene, especially the film’s climax.

Some writers even like to put down a detailed, structural plan – even a chapter by chapter outline for books – consisting of what character is where, what they’re doing, what key things they will say and how this informs the whole project, before they begin the task of writing.

This, to me, sounds like an arduous, controlling method to force creativity and climb a big brick wall before setting out on the writing journey – which should be an organic, natural one – where you’re probably better off picking up creative nooks and crannies along the way. I’d rather get going with it, but I also understand some people’s brains need to know the certainty of where they’re going with a writing project. That’s great. So if this works for you then try that too (I know a lot of my scriptwriting friends prefer this planning and writing technique).

Ultimately, though, whether you’re a dreamer or a detail-oriented afficianado, whether you meditate or modulate, you do – eventually – have to take that step and get writing. So, er, what are you waiting for? Crack on.